Fake news is the epidemic of this age, a digital epidemic. It is spreading its wings in the digital landscape and affecting anyone who is not well prepared.

In the old times, people were taught and trained to identify and avoid diseases that were widespread and thought to be with no cure.

People these days are in need of similar training for fake news, for fake news may not just affect your health; it may also affect everything else.

People are social animals; they tend to behave in a generally acceptable way in society.

When society has shifted one of its main forms of interaction to a digital one, one can be sure that their behavior in daily life would reflect that change as well.

The collective input from the internet influences the choices we make in an individual and collective manner.

Advertisements are a huge example. The quality and convincing power of an ad becomes a deciding factor in ultimately choosing a brand when buying the simplest of things, like a headband—why not an Adidas one?

Fake news is sort of like marketing which is let to run amok. It is the distant ugly cousin of marketing from abroad.

There are no moral obligations, fake news posters can say whatever they want as long as it plays out to give their desired effect.

And, with proper planning, whole campaigns have been launched to get mixed results. Most often the mindset is—if you can’t convince them, at least confuse them.

The issue raised to new heights during Brexit and the 2016 U.S. presidential elections.

It is not that the fake news had no effect before; it is that it was the first time the effect was collectively reflected on major issues and translated to tangible actions.

Don’t get us wrong here; it is not simple mathematics where you add two values to get the third one.

Fake news changes opinions, how many and to what extent? No one knows for sure… this is why there is still a debate going on whether the results were a direct effect of it or not.

Even if that impact is unknown, what is known for a fact is that fake news exists.

The nature of fake news is such that it depends and thrives on the underlying technology. As technology becomes more advanced, expect AI-driven fake news campaigns to become smarter and harder to tackle than before.

This requires an even smarter solution to counter the threat.

This requires … a human touch.

While tech giants like Facebook looked hesitant in trying to fulfill their responsibility to stop letting its platform from being used for fake news, NewsGuard Co-CEOs Steven Brill and Gordon Crovitz happily came forward with a solution in the shape of their platform.

NewsGuard started its journey being a browser extension. It is founded by journalists Steven Brill and Gordon Crovitz, who sensed the need of the time of fighting fake news.

They knew that it required human intervention and what is better than getting the expert to do the job for you. This is why NewsGuard relies on human input.

Almost all social media platforms these days, in an effort to fight fake news, employ some sort of mechanism. Almost all of them rely on algorithms and try to determine whether the source is genuine and trustworthy or not. There are, however, a few problems with this approach…

NewsGuard utilizes experts, journalists and media executives, to rank different websites based on their history and tough criteria on a trustworthy scale. The criteria are nine factors based on transparency and credibility.

A website is marked on all these criteria by different NewsGuard analysts who are journalists by profession and are also overlooked by editors.

The websites that pass the criteria get a green rating and the rest are rated as red.

While visiting the website, if you have the NewsGuard extension turned on, you can see the red or green icon on the address bar.

The point that NewsGuard tries to make is that it is not giving the reader the best news source website or the top site for political or entertainment news, rather, a tool to see whether the site they are visiting follows certain ethics and standards.

This will give insight to the user about their source of information and help weight their opinion.

The idea is powerful enough to have caught Microsoft’s attention.

So much so that Microsoft has partnered with NewsGuard to provide warnings to its Edge browser users about untrustworthy news sites.

NewsGuard was an extension that could be added to browsers. Just like any other extension, it could also be added to Microsoft’s Edge browser as well.

This year, however, Microsoft has partnered with NewsGuard and now it comes as a pre-installed plugin in the Edge browser app for Android and iOS.

The option for the NewsGuard rankings can be turned on in the settings menu and once it is turned on, you can see the trustworthy ranking it was given.

You can also see the complete score of the website against all the criterions if you click the “the Full Nutrition label” option.

The inclusion of NewsGuard in the Edge app shows that Microsoft may be planning for it to be a core part of its browsing applications in future.

So, although Edge is not the go-to browser for most people… we suggest that it should be for those of you who like to indulge themselves in information, particularly news.

How Do I Use NewsGuard on My Phone?

If you have Microsoft Edge browser on your mobile device already and want to use the NewsGuard facility, all you have to do is turn it on.

It is available in the latest version of the Edge browser app but it’s not enabled by default.

To turn it on you need to: 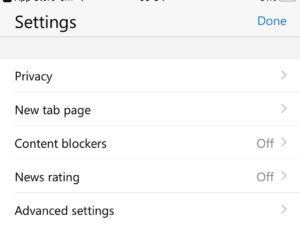 3.Here turn the Display rating on the address bar to On. 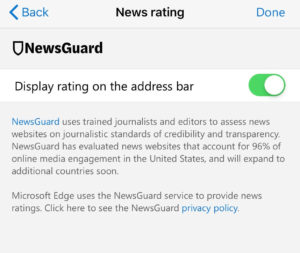 For your PC, you need to first have Edge browser installed and then you can download the NewsGuard extension and turn it on.

Once NewsGuard is on, you can see the red or green icon right beside the address bar… Just before the address.