The evergreen question ‘what is the most secure Operating System’ is still actual in 2016! According to CVE DETAILS, website that processes Common Vulnerabilities and Exposure (CVE) information received from National Institute of Standards and Technology (NIST), Apple had the most vulnerabilities registered in 2015 than any other company.

The new statistics shows that Apple is the new leader in Top 20 vendors with the most vulnerabilities. Surprisingly the ‘secure’ Operating Systems manufacturer had more security holes than Adobe and Oracle. 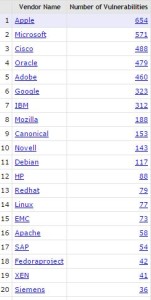 Based on the report, Mac OS X surprisingly was leading in with 384 and iOS with 375 CVE advisories, where Flash was responsible for 314.

But simply pointing fingers and naming Apple the most insecure Operating Systems developer of the year will be, well… not accurate.

There are several factors which help to determine the security of an Operating System. The current report does not show the severity of discovered vulnerabilities therefore, we can not clearly determine the risk associated with the CVE. To be more precise, the vulnerability that requires local administrator privileges to be exploited is very different from the one that can be exploited from anywhere. The risk in the latter is much higher.

However we can definitely say, 2015 was probably the least secure year for Apple and here are our stories for a proof:

Siri and Google Now Can be Hacked and Controlled Remotely